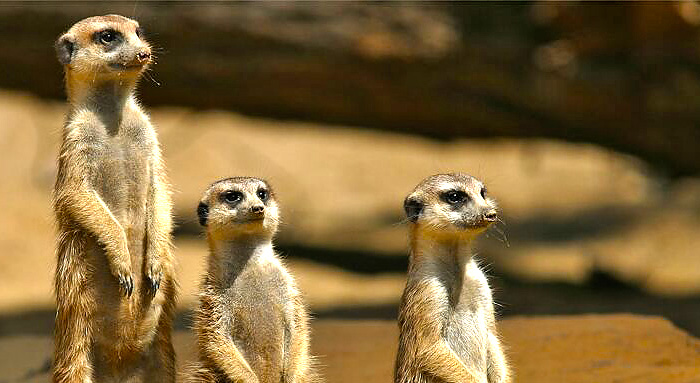 The abundance of wildlife, which once occurred in the Magaliesberg, was well described by early explorers.

It is therefore with some certainty that we can assess how much it has declined both in terms of variety of species and in sizes of populations. At least twenty species of large mammals have been eradicated from the mountains during the last 150 years. Recently some of these have been reintroduced into nature reserves but there is still a complete, and presumably permanent, absence of elephants, lions, black and white rhinoceros, buffaloes and hippopotamus.

However, for all those mammalian species, which were exterminated, there are many more which still roam wild over the whole Magaliesberg range. Surviving without any contrivance of man, they are an integral part of the nature of the mountains today.

A wide variety of mammal species inhabits the slopes of the mountain and most of this range freely from the north to the south side.

Two similar-sized antelope occur on open slopes, grey rhebok, Pelea capreolus, and mountain reedbuck, Redunca fulvorufula. In both species it is only males which carry horns and by these they are easily distinguished. Horns of the grey rhebok are thin, straight and almost parallel with each other, while those of mountain reedbuck are splayed outwards and curved forwards over the head. Kudu, Tragelaphus strepsiceros, while no longer common in the Magaliesberg except in reserves, are more frequently seen on northern slopes. Warthogs, Phacochoerus aethiopicus, are also occasionally to be seen on flatter regions near the foot of the slopes.

Probably the most conspicuous mammal in the Magaliesberg is the chacma baboon, Papiio ursinus. They forage over the entire range, often venturing onto farmland in valleys but invariably retreating to cliffs at night when threatened. Here their predators cannot compete with their agility on the rock face, and innumerable fractures and ledges provide secure roosts for sleeping.

The teeming mammalian life, which attracted the nineteenth century hunters to the Magaliesberg, has now all but disappeared, with only limited examples represented in nature reserves. Nevertheless, a great variety of secretive and fascinating creatures still abound to reward patient observation.

Sign up for the latest news and get exclusive offers from our members!

Birds of the Magaliesberg - Burchells Coucal often called the "rainbird"
It's a resident species and normally found in pairs. Has a wide range of food items from snails, reptiles, small mammals, small birds and eggs. ... See MoreSee Less

Book your spot in the Magalies Meander and make it a long weekend break ! Try an adventure activity, accommodation, go country shopping or just chill out!
www.magaliesmeander.co.za ... See MoreSee Less

Junglers Adventure Tours have organised a variety of long weekend adventure specials for you to choose from - make your choice and book now! ... See MoreSee Less