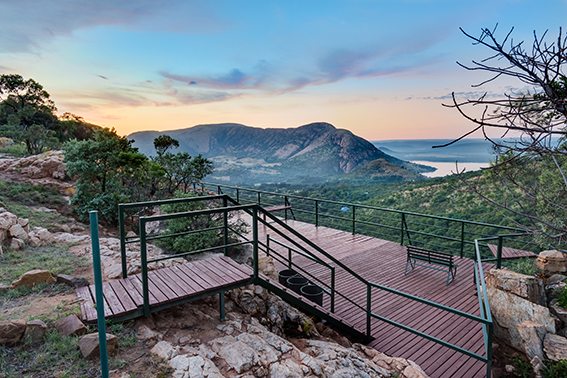 The Magaliesberg mountain range is a microcosm of the magnificence of nature and the turbulent history of South Africa.

Its present tranquillity belies the drama of its geological formation. More than two billion years ago huge seismic forces cracked the bed of an inland sea and tilted it skyward. Molten magma pumped into fissures and burned deep kloofs in the rock. Over millions of years the jagged peaks of the tilted seabed were scoured by a continental ice sheet, then buried in swamp, smothered under desert sands and finally capped with volcanic lava. Sixty million years ago the covering began to weather away and the mountains re-emerged to become the cliffs, the gentle slopes, the secretive kloofs and the tumbling streams we know today.

The geology of the range created different habitats that support a variety of wildlife that is exceptional both in its abundance and in its diversity of species. Grassland of the highveld reaches the mountains on the south and give way to woodland in the deep rich soils of the lower slopes. The warm, north-facing slopes of the ancient seabed harbour the plants and animals of the dry bushveld while the sheer cliff edges provide safe, inaccessible roosts for Cape Vultures, Black eagles and baboons. The shaded kloofs, watered by clear perennial streams, maintain a gentle microclimate for varieties of ferns and flowers and a retreat for the wary leopard. Unique endemic plants have evolved in this benign environment such as the Fairy Elephant Foot, a succulent with vivid pink flowers and leaves that precisely match the re-crystallised stones at the edges of kloofs. Another endemic is Pegler’s Aloe that has shaped itself to withstand the wind and fire of the summit.

In the early nineteenth century the prosperity of Batswana society in the Magaliesberg was shattered by invasions, first by the Bapede from the east and then by the Ndabele under the formidable leadership of Mzilikazi. For a decade he conquered and controlled the people from the Vaal River to the Limpopo. To his domain came early explorers and adventurers, drawn by his fame and the reputation of the wildlife in what were then called the Cashan or Kgaswane Mountains after a well-known Tswana chief. Robert Moffat, the famous missionary became Mzilikazi’s close ally, Andrew Smith, founder of the South African Museum lead a scientific expedition, Cornwalles Harris hunted here and discovered the Sable Antelope, and many other famous naturalists visited the area.

These pioneers were followed by frontiersmen of another sort – Dutch trekkers from the British-ruled Cape seeking new lands. They drove out the Indebele, renamed the mountains Magaliesberg and founded settlements of their own. Conflict between Dutch and British eventually escalated into war and fortifications in the Magaliesberg are reminders of violent engagements during the Transvaal War of 1880-1881, the South African war of 1889-1902 and the 1914 Rebellion.

The ability to “meander in the Magaliesberg” to enjoy its beauty and understand the romance of its turbulent history, is a great privilege. Its protection has been a continuous battle by dedicated conservationists and landowners. No matter whether one’s ancestry is Batswana, Nguni, Boer or British and no matter what one’s focus of interest or enjoyment may be, the Magaliesberg is a national treasure where all South Africans can find their roots.
Magaliesberg was proclaimed a World Biosphere Reserve by Unesco in June 2015

Sign up for the latest news and get exclusive offers from our members!

Jameson Country Cottages offer six Victorian styled cottages with self-catering accommodation for up to 18 guests. Each cottage is fully equipped for self-catering and all cottages have their own patios and braai facilities, Book for after the lockdown. Call: 076 733 0275 jamesoncottages@mweb.co.za ... See MoreSee Less